All Reviews
Bluu Black Friday: Save 30% storewide! Discount will be automatically applied at Checkout.
support@bluu.com
My Account

We will send you an email to reset your password. 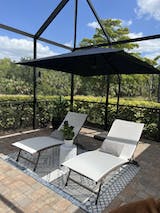 Love this product. It took about 1 minute to put set up. Sturdy and simple to use. So glad we go the tan material, it looks beautiful when the sunlight hits it. The 3 tiers keep it steady even in high winds.

We had a base that should have worked with the umbrella and it was half the cost of this Bluu base. It wouldn't work, though, because of the pedal that lets you turn the umbrella - the generic base doesn't have a notch for the pedal and there is no way to take the pedal off. The Bluu medium base doesn't have wheels, like our other base, so you can't easily move it around. Instead, moving the umbrella requires you to fold it up, remove the base pieces (it comes in four pieces which each have to be filled separately), move it, then hope it stays standing while you move the base pieces and put them back on. I'm not a fan but it was the only option that would work with this umbrella. I wouldn't buy the umbrella or this base again - find something that works with a generic base.

This umbrella is amazing and worth every penny! Highly recommended! Maximum star review for this umbrella! The packaging was organized and sturdy. Assembly was easy with 6 simple bolts and the required wrenches were included too which made it convenient. The umbrella is durable, easy to use with a high-end feel, function and look! I am excited to receive the cover and the weighted base for maximum function.

Not sure what kind of umbrella I got.
How do I know?

I have to say, it's just a brand I like very much. It brings me a lot of convenience. My family and I like it very much. I think bluu is a trustworthy brand. I will buy more products in the future. I hope to surprise me again

I'm well satisfied with the product,great value for the $, the fabric is not SUNBRELLA but the QUALITY is identical,and on top of that 3 years warranty cantilever umbrella on a budget,my husband loves it, GREAT PRICE GREAT VALUE MONEY WELL SPENT

We are very pleased with the team at Bluu! They provided great customer service, communication and follow through for assistance! The Redwood Cantilever Umbrella is of outstanding quality. Great value for the price!

We are very happy with this umbrella it way nicer than I expected. It was very easy to assemble and very sturdy. Love the color and the 360° rotation works well. Thought about getting the lager 9' model but for the difference in coverage this one was in our budget. With the movement of the sun in our location I can easily move it a couple of feet to maintain the coverage if needed. So far the tilt adjustment and the swivel have enabled us to maintain coverage. The base fits under the lower deck rail so no need for clumsy weights. I just use a couple of wedges to limit the movement, just have to cut to length an stain. 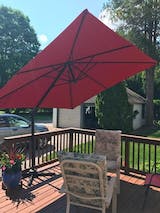 We loved the umbrella.
It is wide strong and versatile.
It became an entertainment for are guests.
Everyone gets surprised at umbrellas ability of the 360° spinning.
Over all 5 star.
We will see how long this will last and will update the review. 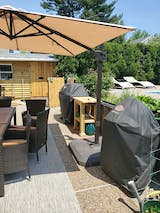 Added shade to pool area. I liked it so much I added a second Bluu offset umbrella which replaced a small table umbrella. Big difference. The area seems much more inviting. 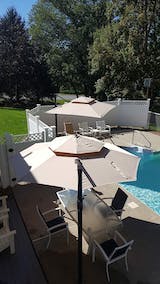 I purchased the umbrella to shade a spa from harsh sun and it works wonderfully. It states 95% of harmful rays are blocked and it certainly seems so after a couple of weeks use. Putting it together was simple as well as bolting to the deck and I’ve purchased a cover to protect it when not in use.

Love this umbrella, color quality and sturdiness are awesome. Love the fact it tilts and pivots. We did need to move the stopper to make the umbrella level, which the seller said they are made to tilt up slightly. Overall we are super pleased. Compared to local vendors, this was a great deal. 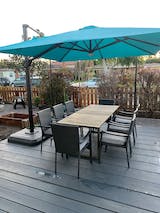 Bluu is our “go to” for outdoor umbrellas (we have 3) and this one does not disappoint! It was a breeze to assemble and so easy to maneuver! If you’re looking for a cantilever umbrella, this is the one! Well worth the money! 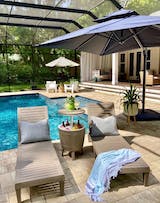 I really dig this umbrella. Instructions were clear and concise. There's not much too it. The most challenging issue you'll run into is figuring out that you have to unlock it to extend it out. The important thing to note is you'll definitely have to buy a base for it. But you don't have to buy their specific one. I was able to pick one up locally that you fill up with water and it works just fine.
I held off on reviewing until I put it through an actual test... and I tested it more than I thought I would. I had a BBQ at my place last night and it covered my 6'x4' table just fine... and in the middle of my BBQ, it began to rain unexpectedly. It actually kept us drier than my guests were expecting. Wind was blowing at a nice clip, and it held up extremely well.
The manufacturer says that it has a 2 yr warranty on the canopy. Which is a nice reassurance, because I bought the "raisin purple" color, so I'm not sure how much this thing will bleach out. Its also nice that they have an 800 number to call to speak to someone if need be. Not some random email that you don't know if anyone will respond. Overall, I'm happy with my purchase. Definitely more reasonable than a lot of the umbrellas you see at Lowes or Home Depot.

I love this beautiful umbrella! The design and quality is amazing. It has been windy in Illinois and this Umbrella withstand the wind. I love the option that you can bend it and it has UV protection. 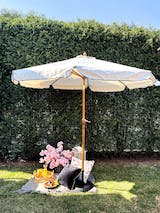 This is a well made product for the money…packaged with care to avoid shipping. Setup is easy and first impressions are this will hold up better than the box store options. Looking forward to many conversations under this this summer!

Quality umbrella! Very beautiful!
The tiered layers of the umbrella are perfect for the breezy area I have it in! I was hesitant to open it because I have never purchased an umbrella without seeing it first, but when I did it was amazing! Highly recommend this umbrella…it is everything I wanted! Easy assembly and great material! 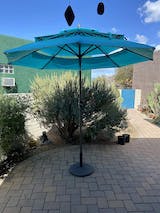 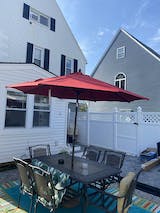 We are still waiting to receive the umbrella which seems to have been lost in transit. I’m working with customer service to try to have another umbrella shipped out. I’ll update the review once able to actually use the product.

Bigger than I expected! 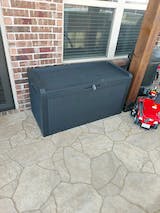 I have so many miscellaneous things On my deck and winter is here so I grabbed this deck box to store it all away until o need it again. The size is perfect and it made it easy to store all my solar lamps and miscellaneous items and kids toys. The box is waterproof and weatherproof and looks like wood but is a solid plastic . I like the built in handles. It’s so easy to wash and wipe clean as it’s that type of material I can hose it down or I can just wipe it clean. I didn’t need any tools to assemble it literally just snaps together! It’s even lockable if I needed to lock away the stuff. It can hold 32 gallons of things . I love my new deck box highly recommended for the price!